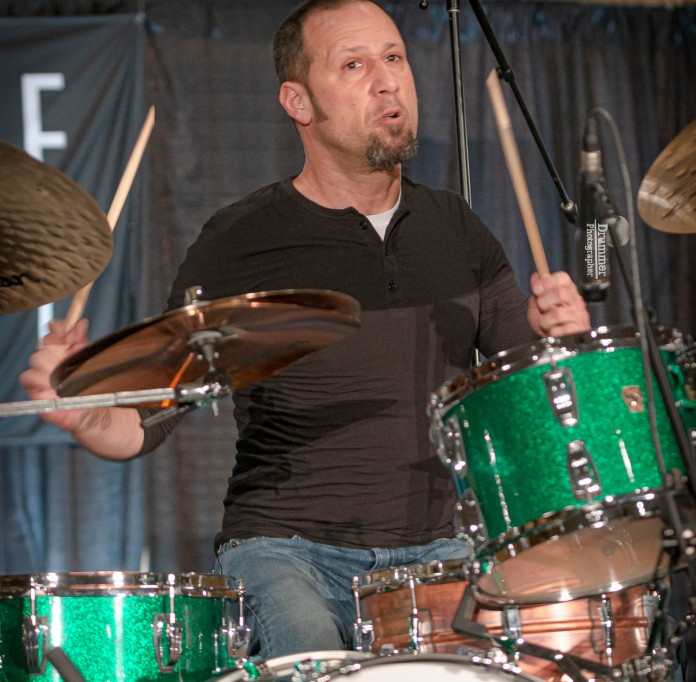 Coming on the scene as a metal drummer in the late eighties, Dave DiCenso has since worked in a diverse array of musical contexts; from hardcore and prog, to rock, pop, jazz-fusion, funk, and soul. Along with his chameleon-like approach, he is known for his individual sound, musicality, and highly animated performances. Dave has also excelled in the field of education and is considered to be one of the great players/teachers of our time.

Dave grew up in a musical family in a suburb on the South Shore of Boston. His father, Dick DiCenso, was a well-known drummer and educator in the area. He was Dave’s first teacher when Dave was five years old. His older brothers John and Joseph were accomplished on drums and piano, respectively. Like their father, both brothers were jazz musicians at heart, while Dave gravitated toward the rock, pop, and R&B music of the day.

Dave studied with his dad until the age of ten, then decided to take guitar lessons. These lessons lasted until age fifteen when he chose to pursue drumming as a career path. That same year, he had his first pro gig, filling in with a band playing a New Year’s Eve party at a hotel. At this point, Dave was playing with local rock and metal bands and discovered he was a fish out of water when the band leader turned around to “shush” him within the first bar of the first song. Despite his lack of skill for playing quietly, he began getting calls for more general business (GB) gigs, soon thereafter working regularly throughout the Boston area.

Having opted out of college after high school, Dave joined Bad Karma – a popular thrash metal band on the Boston club circuit. In 1988, taking a three-month break from the band, Dave went to New York City to study privately at the Drummer’s Collective. Here, he was able to learn from top-shelf drum set educators like Kim Plainfield, Rod Morgenstein, Zach Danziger, Frank Malabe, and Pete Zeldman.

Upon returning to Boston, Dave spent a few months studying with famed teacher, Gary Chaffee, who taught privately from his home outside of Boston. As the 90’s rolled in Dave wanted to play other styles of music and he began working with local pop and rock bands such as Mystery Jones, Farrenheit, Ultra Blue, Jon Finn Group, and Two Ton Shoe, all the while keeping one foot planted in the metal scene.

It was through a colleague in the metal scene that Dave eventually connected with the Cro-Mags; the band credited for being the first to fuse hardcore and metal in the late ’80s. In 1990, Dave came in to finish touring the band’s Best Wishes album. He would go on to do several tours and albums with Cro-Mags including 1992’s Alpha-Omega, and 2000’s Revenge, the latter featuring guitarist Rocky George, from Suicidal Tendencies. Cro-Mags’ legendary frontman Harley Flanagan said of Dave in his book Life of My Own, “He was a sick f*cking drummer. He could play just about any kind of music, but he was a metalhead at heart. He hit the drums so f*cking hard – one of my all-time favorite drummers I’ve played with.” An equally skilled educator, Dave is the author of the acclaimed method books Rhythm and Drumming Demystified and Universal Rhythms for Drumset and is a Professor of Percussion at Berklee College of Music, where he has mentored hundreds of drummers – many of whom have achieved worldwide recognition.

Hailed in the press as “One of the most versatile and musical drummers in music today,” Paul Wertico was a member of the Pat Metheny...

Wayne Salzmann II is an incredibly versatile and active drummer with over 25 years of experience. He is best known for his work touring and...

Dennis Chambers (born May 9, 1959) is an American drummer who has recorded and performed with John Scofield, George Duke, Brecker Brothers, Santana, Parliament/Funkadelic, John McLaughlin, Niacin, Mike Stern, CAB, Greg Howe, and many others. Despite a...

Sarah Thawer is a self-taught drummer based in Toronto, Canada. She started playing drums at age 2 and her first stage performance was at...