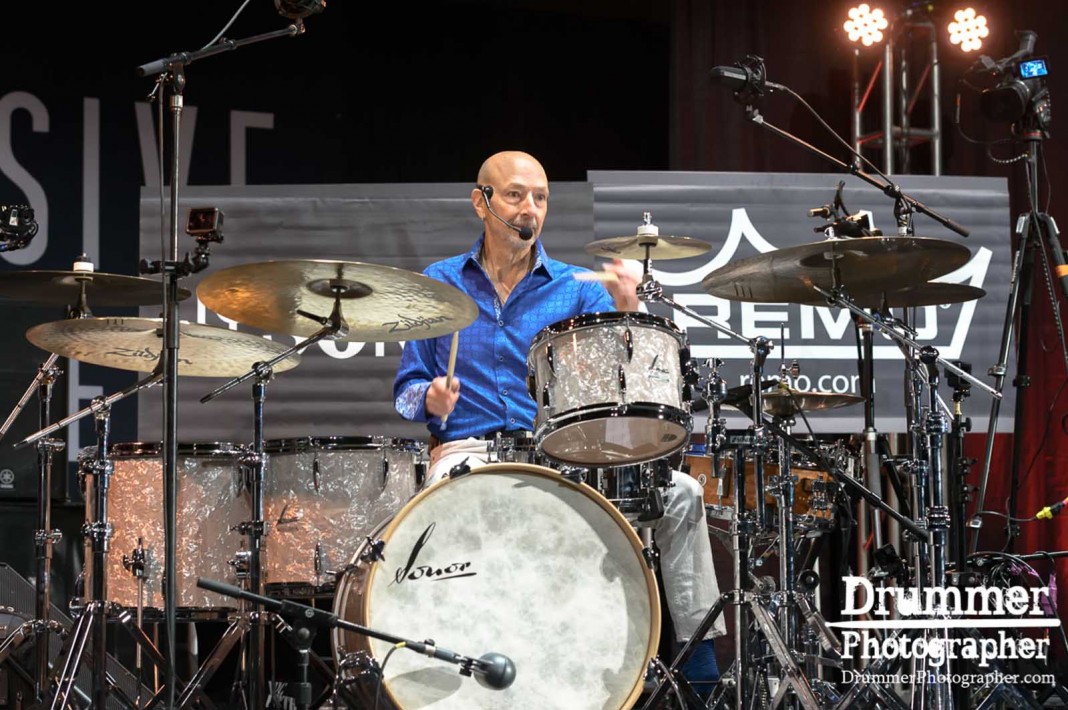 Steve Smith’s drumming, while always decidedly modern, can best be described as a style that embodies the history of U.S.
music. His original love of rudimental parade drumming is evident in his intricate
solos. Likewise, his command of jazz, from New Orleans music, swing, bebop, avant-garde to fusion, is applied with his powerful rock drumming sensibilities and allows him to push the boundaries of all styles to new heights. His musical focus is committed to the exploration of improvised music incorporating styles as diverse as Blues, Jazz, R&B, Funk and South Indian Carnatic.

Smith studied music in Boston at the Berklee College of Music from 1972-76. There,he received instruction from such renowned teachers as Gary Chaffee and Alan Dawson.

In 1974 Smith’s professional career began in full, at 19 years-of-age, with his tenure in the Lin Biviano Big Band, which he toured and recorded with for the next two years while continuing his Berklee studies. At that same time, he also performed with bebopper Buddy DeFranco and was a member of the free-jazz group The Fringe, featuring George Garzone. In 1976, Smith began his association with jazz-fusion by joining violinist Jean-Luc Ponty’s group and recording the 1977 landmark fusion album Enigmatic Ocean, which also featured guitarist Allan Holdsworth. It was while touring with rocker Ronnie Montrose a year later that Smith was asked to join the popular rock band, Journey, which brought his playing to the attention of a rock audience.

With Journey, Smith toured around the world and recorded numerous successful albums.

Smith began leading his own jazz-rock-fusion band, Steve Smith and Vital Information, while still a member of Journey.

Smith’s explosive solos and intricate timekeeping served to gain him much acclaim from sources such as Modern Drummer magazine, whose readers voted him the #1 Fusion Drummer of 2012 and 2105. In 2017, Steve topped an unprecedented three categories in the MD poll: “#1 Rock Drummer,” “#1 MVP” and “#1 Educational Product” for his Hudson Music Book/DVD Pathways of Motion.

In 2013, Steve expanded his artistic endeavors by co-authoring a Hudson Music book (with Daniel Glass) called Roots of Rock Drumming, a behind-the-scenes look at the origins of rock drumming (1948-1965). That same year, Steve joined forces with SceneFour to create a collection of drum-art on canvas called Fabric of Rhythm. In 2017 Steve and SceneFour released a unique coffee table Book+LP with all of Steve’s 13 art pieces plus a 44 minute vinyl LP with 14 solo drumset compositions. To view the, collections go to: www.stevesmithdrumart.com .

In 2016, Steve rejoined Journey to tour with the group for the first time in 32 years. On April 7, 2017, Steve joined Journey band members Gregg Rolie, Aynsley Dunbar, Neal Schon, Ross Valory, Jonathan Cain and Steve Perry, for Journey’s induction into the Rock and Roll Hall of Fame.

As a drummer, Steve Smith has worked for, and with, the best. He is consistently pushing the boundaries of creative drumming and constantly expanding his strong musical voice at the top of the international drumming community.