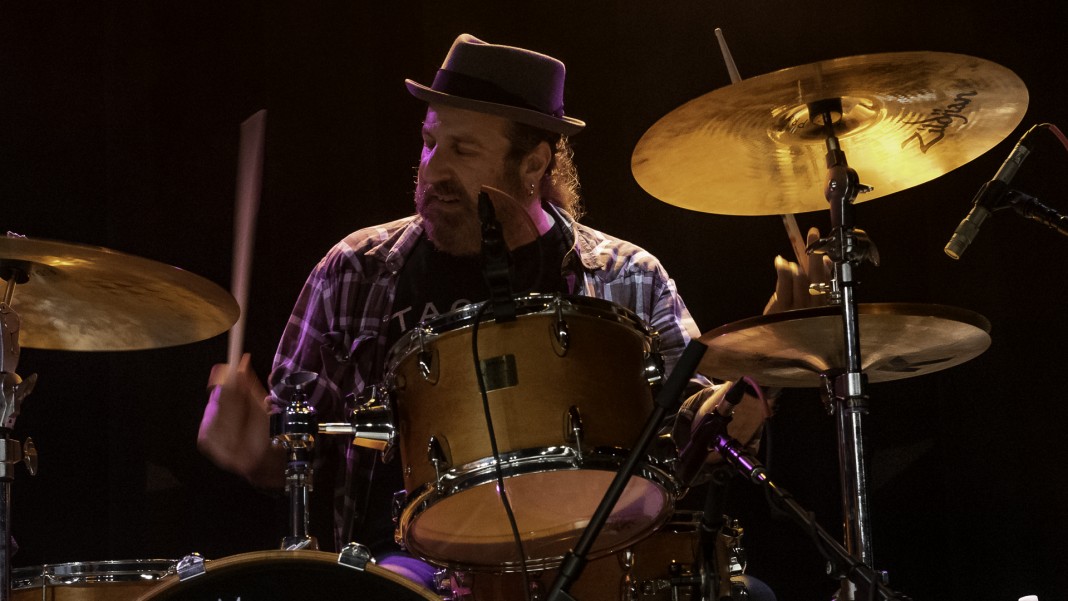 “Aaron Comess is one of the founding members of the multi-platinum selling group the Spin Doctors, with whom he developed his innovative and recognizable drumming style.

Born in Phoenix, Arizona, Comess spent his early years in Dallas and began playing drums at the age of 9. He attended Arts Magnet High School, during which time he won Downbeat Magazine’s DB award for outstanding high school Jazz Musician two consecutive years in a row and had the honor of studying with renowned teacher Henry Okstel. Upon graduation, he went to Berklee College of Music, later continuing his music studies in New York City at The New School, studying under legendary session great, Bernhard Purdie.

While still studying at The New School, began playing the New York City club circuit with the other founding members of the Spin Doctors: Chris Barron, Eric Schenkman, and Mark White. The four quickly developed a huge New York City following playing at premiere clubs, such as The Wetlands.

As the drummer for the Spin Doctors as well as a collaborating writer, Comess went on to secure a contract with Epic Records. Comess’ playing and co-writing skills helped catapult the band to worldwide recognition, bringing them a Grammy nomination, American Music nomination and thus far, record sales of over ten million albums.

Additionally, Comess has also worked as a session musician, and producer with a multitude of talented artists, such as, Joan Osbourne, Bilal, Marc Cohn, Isaac Hayes, and Ivan Neville. He has performed all over the world and appeared on the covers of Rolling Stone magazine and Modern Drummer magazine where he was voted into both of the following readers poll categories: Best Up and Coming and Pop/Rock. Comess endorses Remo drumheads and Zildjian cymbals and drumsticks.

Currently, aside from playing with the Spin Doctors, Comess works as an in-demand session musician and a producer for various artists. He is in the process of co-writing and recording new material for an upcoming Spin Doctors album. Aaron Comess lives in New York City, where he plays with numerous rock, jazz, and experimental bands.