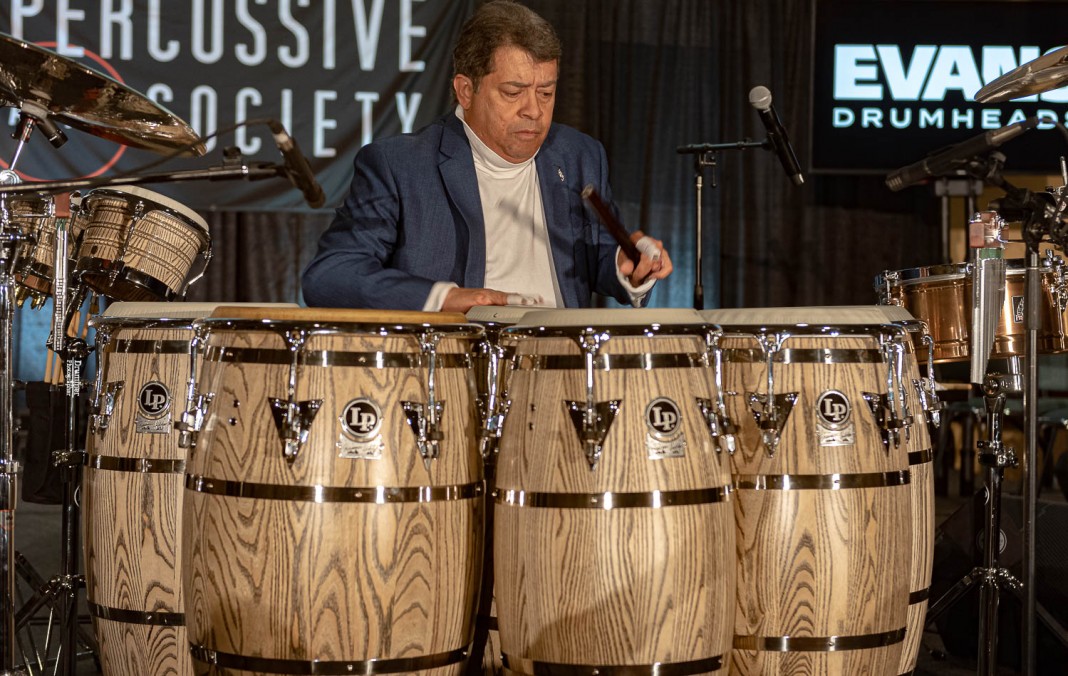 Widely acknowledged as one of the greatest percussionists of all time, Giovanni Hidalgo, began playing percussion at the age of five. Born into a family of musicians, Giovanni first played on a set of congas handcrafted by his father, the great Jose “Maneñgue” Hidalgo. Giovanni first became in the early eighties when traveling to Cuba to work with the group Batacumbele whose debut album has become a cult favorite. Featuring his incredible hand-drumming technique, the album shot Giovanni to instant prominence. His incredible technique and style were the foundation of the hybrid musical style called Songo.

His collaborative effort with pianist, Michel Camilo,” Hands of Rhythm” was nominated for a Grammy award in the Best Latin Jazz category. A number of innovative products bear Giovanni’s name including the LP Galaxy Giovanni Congas.

“An artist whose electrifying performances have moved fellow musicians, critics and audiences to such effusive accolades as “touched by the hand of God,” and “The Michael Jordan of Percussion,” Giovanni “Mañenguito” Hidalgo is an unrivaled performer whose unique talent, skill and technique is admired by percussionists and jazz musicians throughout the world. He is bringing new respect to Latin rhythms as well as to the rhythms of his birthplace, Puerto Rico.

The sounds other drummers normally create with sticks, Giovanni Hidalgo creates with his hands – with lightning-fast precision. He is particularly admired for his perfection of double and triple stroke rolls, effortlessly implementing drum-set stick rudiments with his hands.

Giovanni Hidalgo’s peerless speed, grace, and control, demonstrated at clinics sponsored by Latin Percussion and at concerts around the world, continue to dazzle audiences because of. As LP founder and chairman, Martin Cohen puts it, “Giovanni represents the talent of a new generation. He’s arguably one of the most talented and respected drummers of our time, and rarely is there a musician who reaches his heights.”

Giovanni Hidalgo is a spiritual force in a human figure with an unlimited capacity to love and this love he lives through his drums. He is a visionary who has absorbed great influences from all around the world. His talent, perseverance, and devotion to his art have driven percussion to a “next level” and his diffusion is his way to love his fellowmen.”- DRUMMER ZONE