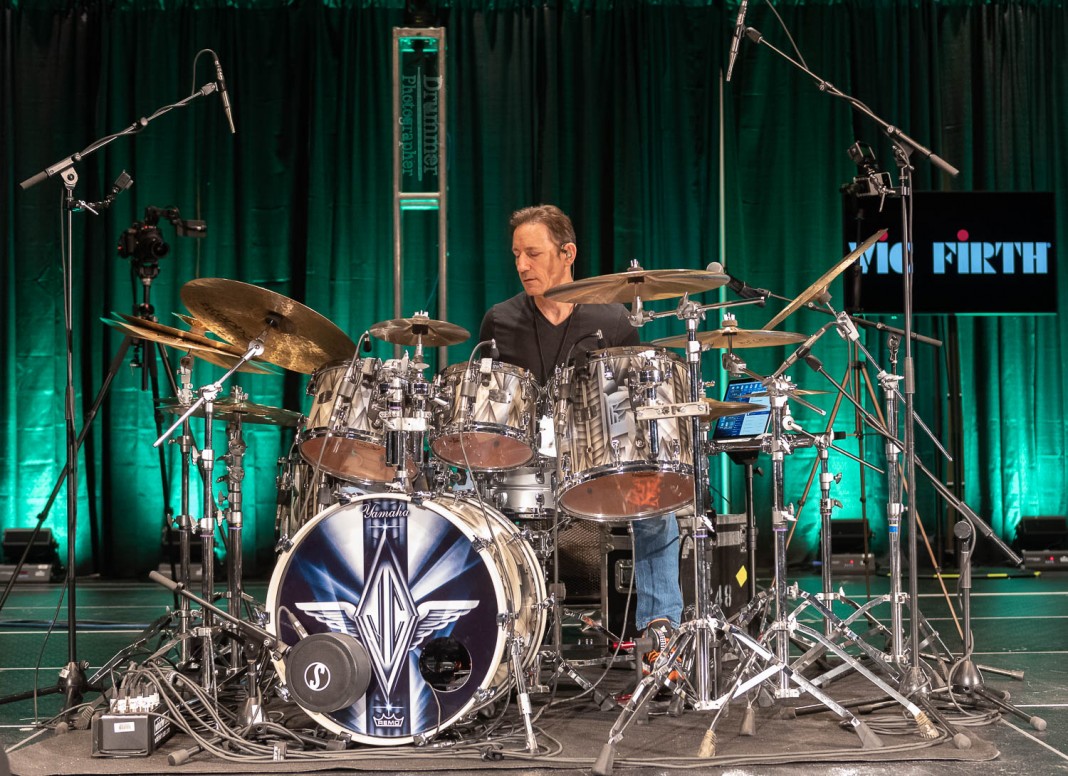 “Jimmy Chamberlin was born on June 10, 1964, in Joliet, IL. Receiving musical inspiration early on from his father and older brother (who both played in local jazz groups), he soon began taking lessons himself under the tutelage of future Yanni drummer Charles Adams; this instruction provided the nine-year-old Chamberlin with an understanding of the basic fundamentals and rudiments of drumming. Through his teenage years, he went on to study under several other teachers, learning Latin, Brazilian, and big band technique. After high school, Chamberlin spent the next few years alternating between gigging locally in area bands and working as a carpenter to pay the bills. In August 1988, he witnessed a show at the Chicago Avalon by a fledgling band known as The Smashing Pumpkins. The band, then consisting of singer/guitarist Billy Corgan, guitarist James Iha, and bassist D’Arcy Wretzky, were still utilizing a drum machine on stage, and while Chamberlin thought there was much room for improvement, he saw potential in Corgan’s songwriting. Local nightclub owner Joe Shanahan was also in attendance, and he informed the trio that they could play a show at his Cabaret Metro venue with just one stipulation: they must replace the drum machine with an actual drummer. Through a mutual acquaintance, Chamberlin was introduced to the group and quickly taken on board; they soon played their first show as a quartet on October 5 at the Metro.” All Music

As the propulsive engine driving the Smashing Pumpkins, Jimmy Chamberlin earned respect as one of the most popular, influential drummers of the ’90s. The importance of Chamberlin’s drumming on the Pumpkins’ music cannot be understated. His extraordinarily quick hands, furious snare rolls, and crackling rimshots recalled the likes of Ian Paice and Dennis Chambers, and yet equally important to the band was his tasteful, understated playing on their quieter numbers. This oft-overlooked side of his ability revealed a musician of considerable depth and creativity with a keen ear for nuance, which made him a glove-like fit for the wide range of material the Pumpkins produced in their existence.
In addition to the Pumpkins, Chamberlin has his own project – The Jimmy Chamberlin Complex which encompasses everything from fusion to straight-ahead to alternative and is active in the Chicago Jazz Scene playing with the great tenor player Frank Catalano among many others.

“The best thing about drumming is that it has no end, there will always be something you can’t know yet.” -Jimmy Chamberlin